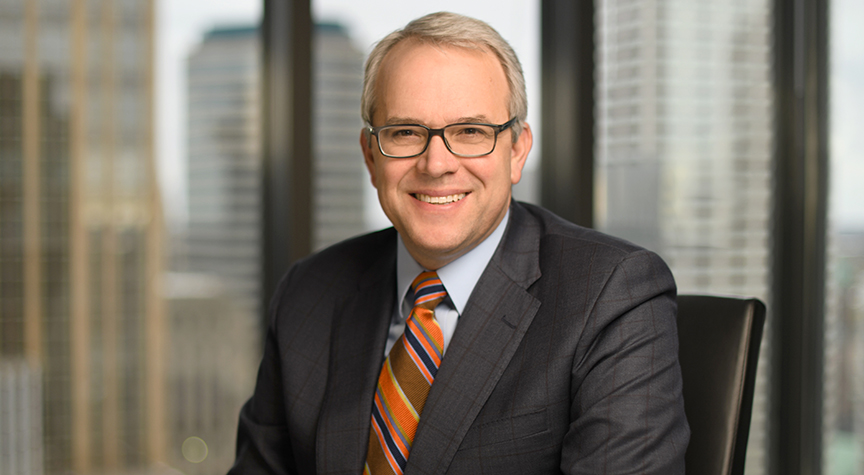 A partner in Taft's Minneapolis office, Steve was the president and managing partner of Briggs and Morgan, P.A. until its combination with Taft on Jan. 1, 2020, and partner-in-charge through Jan. 2021. Throughout his 25 years with the firm, Steve has served in a number of other leadership roles including firm chair, practice group leader and as a member of the board of directors and executive committee. He is also a member of the newly formed Distressed Company Task Force that was created to assist borrower clients in every way, including how to navigate discussions with their lenders and in addressing concerns over suppliers and stakeholders. Please reach out to him with any questions on how he can counsel you during the COVID-19 pandemic.

A noted practitioner in the areas of banking and finance, capital markets and real estate, Steve’s strong business acumen informs his approach to building a sustainable firm that responds nimbly and meets the needs of clients today and long into the future.

Mezzanine and Junior Capital Finance
Steve regularly represents mezzanine funds and other junior capital providers in connection with their debt and equity investments, including unitranche and second-lien financings. During the past two decades, he has represented fund clients on dozens of subordinated debt and equity investments, ranging from $2 million to in excess of $100 million. These transactions have involved manufacturers and service providers in a wide variety of industries, including engineering, agricultural, technology and service.

He represented the NFL’s Minnesota Vikings in connection with the financing, development and operation of U.S. Bank Stadium, a $1.1 billion, 66,000 seat multi-use facility located in downtown Minneapolis. Steve also represented the team and its ownership on their 194-acre mixed-use development of the former Northwest Airlines Headquarters site in Eagan, Minn. The project included the financing and construction of TCO Performance Center, the Viking’s state-of-the-art headquarters and training facility, and a 356,000 square foot, 320 room conference-center hotel.

Steve also served as counsel to MLB’s Minnesota Twins in the issuance of an aggregate $210 million in project revenue bonds used to finance the development and construction of Target Field, a $550 million, 40,000 seat professional baseball stadium also located in downtown Minneapolis. This representation included advice on structuring the transaction as a project financing; the creation of a new bankruptcy-remote entity to hold certain ballpark-related assets pledged to support the credit; the negotiation of financing agreements and supporting agreements with various governmental entities and the issuance of legal opinions, including a non-consolidation opinion.

Loan Restructuring and Workouts
Steve has represented a number of financial institutions and corporate lenders in loan restructuring and workouts and creditors’ rights and remedies issues.