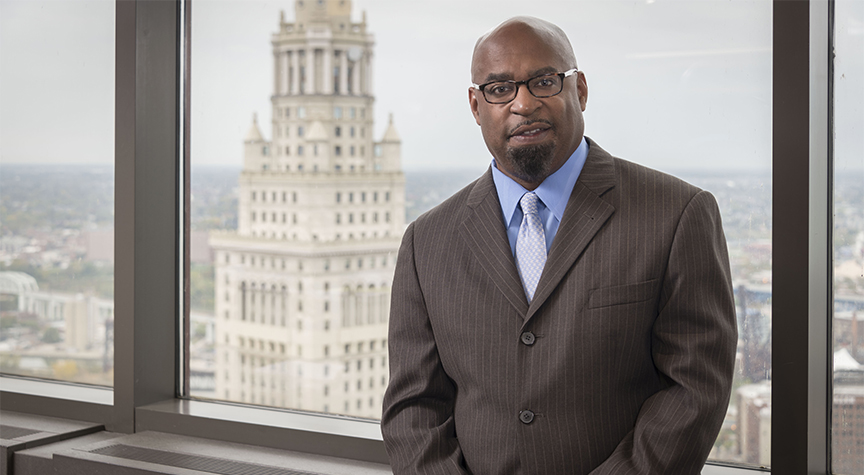 Adrian provides counsel for private sector clients on issues including equal employment opportunity litigation, wage-hour problems, employment of the disabled, federal housing, and other labor matters. Co-partner-in-charge of the Cleveland office, Adrian is also a member of the firm's executive committee and serves as Taft’s chief diversity officer. He helps to drive the firm’s commitment and strategy regarding diversity and inclusion across our offices and in the communities that we serve.

Adrian is president emeritus of the board of directors of the Legal Aid Society of Cleveland. He helped to oversee the activities of Legal Aid’s 55 staff attorneys, 90 staff members and 1,400 volunteer lawyers across four offices that serve low income clients in Ashtabula, Cuyahoga, Geauga, Lake, and Lorain counties. Adrian is the incoming vice president of the Cleveland Metropolitan Bar Association and is the co-chair of its Diversity & Inclusion Strategies Committee.

Adrian formerly served on the Commission on the Rules of Superintendence for Ohio Courts, having been appointed by the Supreme Court of Ohio. In this role, he was one of 19 members who represented various judges, associations, attorneys, magistrates, clerks of court and court administrators. Adrian is also a member of the Supreme Court of Ohio's Task Force on Commercial Dockets.

Adrian is an active member of the firm's Diversity & Inclusion Committee. He is an active member of the Norman Minor Bar Association and the Cleveland Metropolitan Bar Association, where he serves on the Thought Leadership, Diversity & Inclusion, and Community Trust Committees, as well as being one of nine Professionalism Conciliation panel members. He is recognized as 2020 Education Law "Lawyer of the Year" by Best Lawyers in America. He is also honored as a Leading Lawyer for Education Law and as an Ohio Super Lawyer for Labor Law. In 2020, Adrian was named to the Lawyers of Color Power List, which recognizes the most influential minority attorneys and allies in the United States.

Panelist, “Establishing an Inclusive and Inviting Environment: A Panel Discussion on Race and Racism in the Workplace and the American Legal System,” Webinar, Aug. 20, 2020

Requirements and Considerations for Educational Institutions Serving Children with Special Needs Under IDEA, Rehabilitation Act and ADA, May 8, 2020