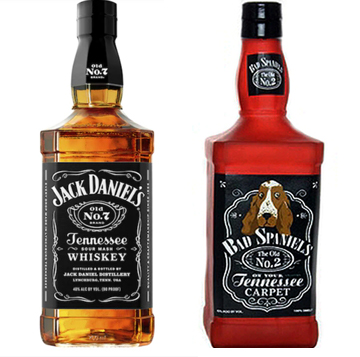 On March 31, 2020, the U.S. Court of Appeals for the Ninth Circuit held that the “Bad Spaniels Silly Squeaker” dog toy that resembles a bottle of Jack Daniel’s Old No. 7 Black Label Tennessee Whiskey is an expressive work entitled to First Amendment protection. The bottles can be seen side by side in the photo.

At a time when the entire world is stoically confronting a global pandemic, the Ninth Circuit in VIP Products, LLC v. Jack Daniel’s Properties, Inc. follows suit, declaring with a straight face that a dog toy is an expressive work and reversing the U.S. District Court for the District of Arizona’s findings of trademark infringement and dilution in Jack Daniel’s favor. It is understandable that trademark holders are now concerned that if something like a dog toy can be considered an expressive work entitled to First Amendment protection, which of their marks can be susceptible to similar permissible infringement or dilution.

The Ninth Circuit agreed that the district court correctly rejected VIP’s request to cancel Jack Daniel’s registered trademark, finding that Jack Daniel’s whiskey bottle design is both distinctive and aesthetically nonfunctional so as to receive trademark registration. The court found that Jack Daniel’s trade dress, the look and feel of the product, is made up of the unique combination of the individual “bottle and label elements” that includes “the Jack Daniel’s and Old No. 7 word marks.” The court also agreed with the district court that VIP’s dog toy was not identical to the Jack Daniel’s mark so as to warrant a nominative fair use defense. Such a defense is not available when the use is not identical to the mark. The Ninth Circuit decision does not alter the landscape of what is entitled to trademark registration.

What the District Court Got Wrong

The Ninth Circuit disagreed with the district court infringement finding, reversing the bench trial verdict that the Bad Spaniels dog toy infringed and diluted Jack Daniel’s trade dress and remanding for further reconsideration. Though it is a defense a trademark holder can overcome, the First Amendment is a shield to trademark infringement under the Lanham Act where the public’s interest in artistic expression is at stake. Applying the test set in Rogers v. Grimaldi, 875 F.2d 994 (2d Cir. 1989), an infringer with an expressive work is liable under the Lanham Act only if the trademark holder shows that the defendant’s use of the mark is either (1) “not artistically relevant to the underlying work” or (2) “explicitly misleads consumers as to the source or content of the work.”

The Ninth Circuit breaks down expressiveness to whether a work is communicating ideas or expressing points of view, and cites prior cases involving a song title (Mattel, Inc. v. MCA Records, 296 F.3d 894, 900 (9th Cir. 2002)) and birthday greeting cards (Gordon v. Drape Creative, Inc., 909 F.3d 257, 264 (9th Cir. 2018)) where expressiveness is found. The Ninth Circuit then relies on Louis Vuitton Malletier S.A. v. Haute Diggity Dog, LLC, 507 F.3d 252 (4th Cir. 2007), a Fourth Circuit opinion that held that “Chewy Vuiton” dog toys that loosely resembled miniature Louis Vuitton handbags did not infringe the Louis Vuitton Malletier (LVM) trademark because the toys were successful parodies of the LVM handbags, marks and trade dress. The Ninth Circuit extends parody to mean expressiveness and therefore found the Bad Spaniels dog toy as expressive works to be analyzed under the Rogers test. As an expressive work, the Ninth Circuit also reversed the finding of dilution by tarnishment.

Notwithstanding, as the Ninth Circuit alludes to in a footnote, the Chewy Vuiton case was decided on likelihood of confusion grounds, not First Amendment grounds as proscribed by the Rogers test. At the time of the Chewy Vuiton case, the Fourth Circuit had not yet adopted the Rogers test. Therefore, this extension of parody in a dog toy as expressive is questionable. Regardless, Jack Daniel’s now has the burden to show the District of Arizona that VIP’s Bad Spaniels dog toy is either not artistically relevant to the Jack Daniel’s trade dress or explicitly misleads consumers as to its source.

Time will tell whether this extension of the Rogers test to parody items like a dog toy will hold up. It is natural for any trademark holder to wonder what is excluded as expressive if a dog toy can pass muster to obtain First Amendment protection. For trademark holders with a stake in protecting their valuable marks, the Ninth Circuit sets a dangerous precedent that requires hyper-vigilance to protect their rights.

If you have questions about this decision or how it might affect your marks, please contact your Taft attorney or a member of our Trademark practice.